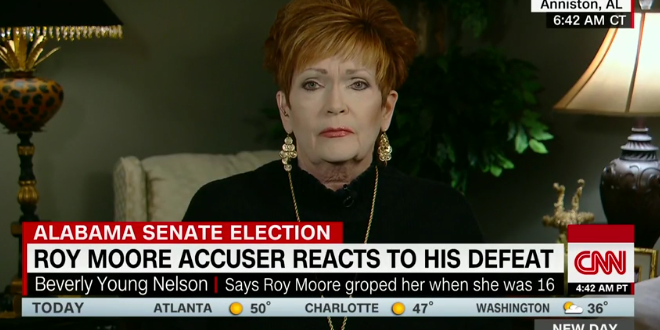 The shocking victory came after multiple women stepped forward to accuse GOP candidate Roy Moore of sexual misconduct, with many of them claiming these incidents occurred when they were underage.

One such accuser, Beverly Young Nelson, appeared on CNN’s New Day this morning, exuding joy to host Alisyn Camerota. “I’m feeling fantastic,” she said. “Roy Moore’s loss means to me the fact that Alabama is about to make some changes and I believe it is gonna be on the positive side of things.”

“I’m super excited. I could not even say more.” “I feel like it was not just me. It was all of us,” she said, referencing Moore’s other accusers.

Beverly Nelson, who has accused Roy Moore of sexually assaulting her when she was a teen, says Moore’s loss shows that “Alabama is about to make some changes” https://t.co/4jpH4inIFb

Previous GOP Rep. Peter King: Bannon Looks Like A “Disheveled Drunk” Who Wandered Onto The Stage [VIDEO]
Next Christianity Today: The Biggest Loser In The Alabama Senate Race Is Our “Severely Tarnished Christian Faith”