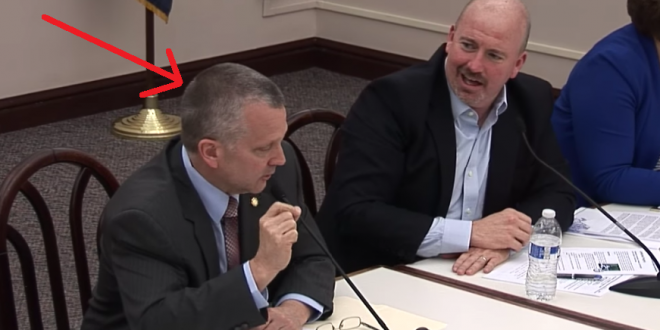 Right Wing GOP Rep Flips Out At Straight Lawmaker: Stop Touching Me, I Am A Heterosexual! [VIDEO]

A conservative state lawmaker on Tuesday affirmed he was a heterosexual as he took issue with being touched in the arm by a male colleague. Rep. Daryl Metcalfe, chairman of the state House State Government Committee, during a meeting castigated ranking Democrat Matt Bradford after the latter touched his arm while addressing him.

In a terse tone, Metcalfe, a Butler County Republican, interrupted Bradford, who was sitting to his left at a conference table, immediately after the seemingly innocent gesture to say:

“I’m a heterosexual. I have a wife. I love my wife. I don’t like men as you might so stop touching me all the time. Keep your hands to yourself. If you want to touch somebody, you have people on your side of the aisle that might like it. I don’t.”

Rep. Bradford is married to a woman.

Video of PA Rep. Daryl Metcalfe freaking out because a male colleague touched his arm – His reasoning: “I’m a heterosexual”

Reminder: Metcalfe also once invited a white nationalist to testify in favor of a bill to make English PA’s “official language” https://t.co/FiKPLYubqj

PREVIOUSLY ON JMG: In August 2013, Melcalfe called for impeaching all pro-gay politicians. In June 2013, Metcalf used a chamber rule to stop openly gay state Rep. Brian Sims from speaking about the historic DOMA ruling on the state House floor, saying that Sims was in “open rebellion against God’s law.” In 2011 and in 2012 Metcalfe introduced bills to insert a ban on same-sex marriage into the state constitution. Both attempts failed.

Previous Trump Lawyers: He’s Too Busy And Important To Deal With Defamation Suit Filed By Alleged Assault Victim
Next Bannon Attacks Mitt Romney For Draft Dodging: You Hid Behind Your Religion While Soldiers Died In Vietnam