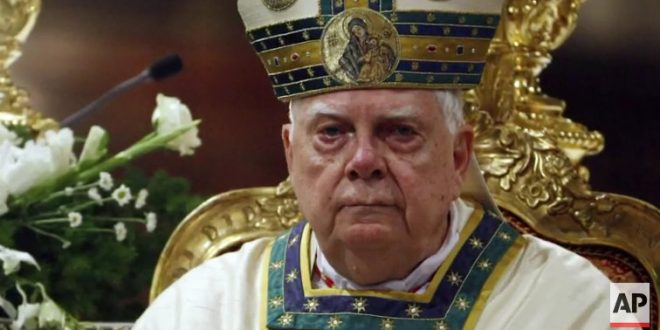 Cardinal Bernard Law, the disgraced former archbishop of Boston whose failures to stop child molesters in the priesthood sparked what would become the worst crisis in American Catholicism, has died, the Vatican confirmed on Tuesday. He was 86.

Law had been sick and was recently hospitalized in Rome. The Vatican Press Office confirmed his death in a brief email to CBS News.

Law was once one of the most important leaders in the U.S. church. He broadly influenced Vatican appointments to American dioceses, helped set priorities for the nation’s bishops and was favored by Pope John Paul II.

But in January 2002, The Boston Globe began a series of reports that used church records to reveal that Law had transferred abusive clergy among parish assignments for years without alerting parents or police. Within months, Catholics around the country demanded to know whether their bishops had done the same.

Mitchell Garabedian, an attorney who represented dozens of people who say they were sexually abused by priests, said Law’s death has reopened old wounds.

“Bernard Law could have prevented many children from being sexually abused,” he said in a statement to NBC News. “He knew what Father John Geoghan had done and he refused to notify the public. He refused to protect the innocent. Law’s death is a reminder — his name is salt in the wound of many victims.”

Alexa MacPherson, who says she was a victim of clergy sex abuse for six years as a small child, had no words of sorrow at the news of Law’s death.

“Good riddance to bad rubbish. I hope the gates of hell are swinging wide to allow him entrance,” she told The Associated Press. “I won’t shed a tear for him — I might shed a tear for everyone who’s been a victim under him.”