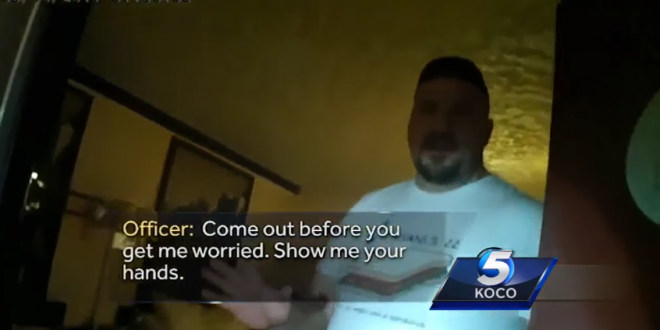 The boy does not appear in the clip, presumably because he was a juvenile.

Police have released body-camera footage of the March night when officers found former state Sen. Ralph Shortey in a motel room with an underage boy.

Before police entered Shortey’s room at the Super 8 along Interstate 35 near Northeast 12th Street, they announced that they were there after receiving a report that the now-disgraced former lawmaker had a juvenile in his room.

Officer: “Come out before you get me worried. Show me your hands. Shortey: “I’m sorry guys. You’re kinda freaking me out a little bit.” Officer: “Yeah. That’s what we do. He’s 17.” Shortey told the officers that he was just helping the teenager as a mentor.

Last week Shortey struck a plea deal in which three child pornography charges were dropped in return for his guilty plea on child sex trafficking. He faces a minimum sentence of ten years. His request for pre-sentencing bail to care for his three homeschooled children was rejected by a federal judge.

Shortey served as the Oklahoma state campaign chair for the Trump campaign and heralded himself as an anti-LGBT Christian family values lawmaker.