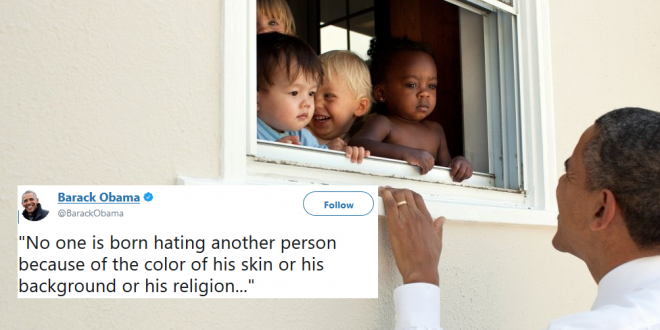 This morning, Twitter released its top timeline statistics for the year: the most-retweeted and most-liked tweets of 2017, and the most frequently cited accounts. The list is fascinatingly strange. The big news is that none of the year’s ten most-retweeted tweets are by Donald Trump. Instead, three are by Barack Obama—and two of the top three most-liked tweets are Obama’s, too. (The second-most-liked tweet is from the singer Ariana Grande, written after the bombing at her Manchester concert, in May.) In perception, this has been the year of D.J.T. on Twitter, tramping like an angry wildebeest across the civic turf. But, according to the company’s numbers, the largest footprint on the landscape has really been B.H.O.’s.

“No one is born hating another person because of the color of his skin or his background or his religion,” goes Obama’s most-liked post of 2017, with 4.6 million hearts. (It also had 2.7 million retweets, making it No. 2 on that list.) The quote is from Nelson Mandela, and the included photo is of Obama hanging out with toddlers of many skin colors. Below that, at No. 5, is President Obama’s official valediction (“I’m asking you to believe—not in my ability to create change, but in yours”), and, at No. 8, his final wave goodbye (“It’s been the honor of my life to serve you. You made me a better leader and a better man”). His note to Senator John McCain, after the announcement of his brain cancer (“Give it hell, John”), is the third-most-favorited.

Trump didn’t make the top ten on the most-retweeted or most-liked lists. Surely there will be a tweet about this.

Previous Transcript Released From Masterpiece Oral Arguments
Next Roy Moore Campaign Wails: Liberals Got On Eventbrite And They Took All Our Tickets For Tonight’s Rally