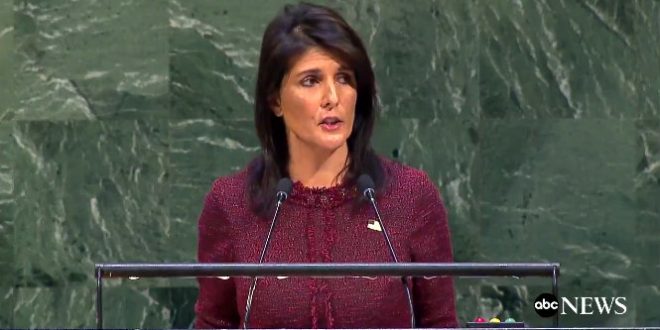 US Ambassador to the UN Nikki Haley issued a direct threat to the United Nations General Assembly on Thursday, saying that the US will think twice about funding the world body if it votes against President Donald Trump’s decision to recognize Jerusalem as the capital of Israel.

“The United States will remember this day in which it was singled out in this assembly,” Haley said. “We will remember it when, once again, we are called up to make the world’s largest contribution” to the UN and when other member nations ask Washington “to pay even more and to use our influence for their benefit.”

And yesterday she did this:

US representative to the UN Nikki Haley wrote her fellow ambassadors to say that she and Trump will be watching as ballots are cast on a General Assembly draft resolution to reject the American decision — and that he will be taking their votes personally.

“As you consider your vote, I want you to know that the President and US take this vote personally,” Haley said. “The President will be watching this vote carefully and has requested I report back on those countries who voted against us. We will take note of each and every vote on this issue.”

.@nikkihaley says “no vote” will change U.S. Jerusalem decision, “but this vote will make a difference on how Americans look at the U.N., and on how we look at countries who disrespect us in the U.N.” https://t.co/w9rqtTJpBA pic.twitter.com/B4b2zGU3YD

Referencing tomorrow’s UN vote criticizing the US embassy move. In the words of the President, “Let them vote against us, we’ll save a lot.” pic.twitter.com/eUGWD4cCBR

#US Ambassador Nikki Haley, @nikkihaley @USUN:”…this vote will make a difference on how we look at countries that vote in favor of this resolution, this vote will be remembered…” #Jerusalem #UNGA

Let’s be clear, Nikki Haley just tried to strong arm the UN on behalf of her Dictator so they can support his Jerusalem decision. We are witnessing the destruction of our foreign policy. Happy #WinterSolstice. 🙄