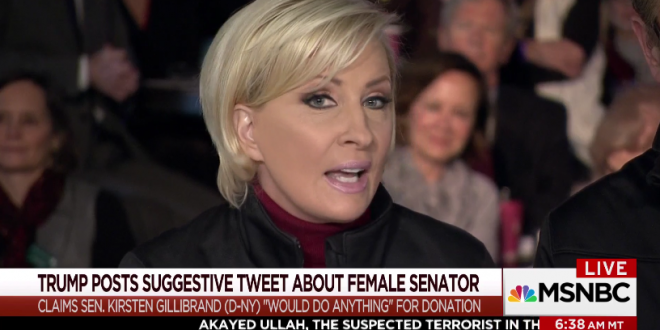 MSNBC’s Mika Rages After Trump Implies Sen. Kirsten Gillibrand Would Have Sex With Him For Money [VIDEO]

“I just want to say something, beyond the fact that is reprehensible that the President of the United States would say something so derogatory and disgusting about a woman. We’re not surprised Mr. President, you do it all the time. You treat women terribly, and you treat the women around you even worse. You treat women like punching bags because it’s fun for you because you are intimidated by women. That’s your problem, okay.

“But to the people who work for you, you need to act. Sarah Huckabee Sanders: good luck today in the briefing. Don’t lie. And do not defend the President of the United States for what he did. If you do, you have no — you should resign.” – MSNBC’s Mika Brzezinski, reacting to Trump’s implication that Sen. Kirsten Gillibrand would have sex with him for campaign donations.

You cannot silence me or the millions of women who have gotten off the sidelines to speak out about the unfitness and shame you have brought to the Oval Office. https://t.co/UbQZqubXZv