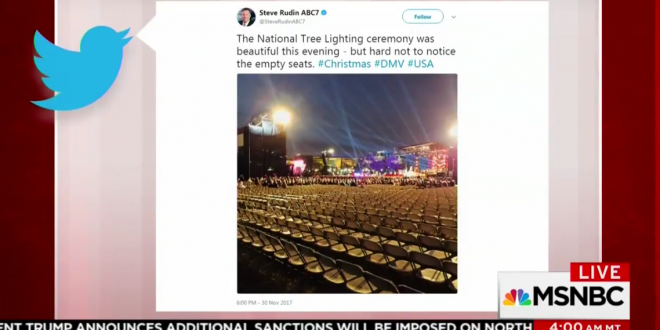 Morning Joe opened up a particularly whimsical Friday-in-December show by covering President Donald Trump’s Christmas Tree lighting at the White House — and ruthlessly mocked him for his lackluster crowd at the typically busy event.

“So a beautiful, balmy evening in D.C., no excuse to get outside,” MSNBC’s Katty Kay started, describing the night. “And you go to the Christmas tree lighting — except not many people show up.”

The biggest in history, period!

Traditionally the White House Christmas tree lighting is standing room only. This is what it looked like tonight as President Trump spoke.
📸@SteveRudinABC7 pic.twitter.com/5nYRJTbvsP

If Trump had wanted more of his supporters to come out, he should’ve advertised it as a tiki torch lighting, instead of a Christmas tree lighting. pic.twitter.com/R4Q6OdUs2F

Previous Obama: If I Watched Fox News, I Wouldn’t Vote For Me
Next GOP Hails Log Cabin Republicans’ 40th Anniversary