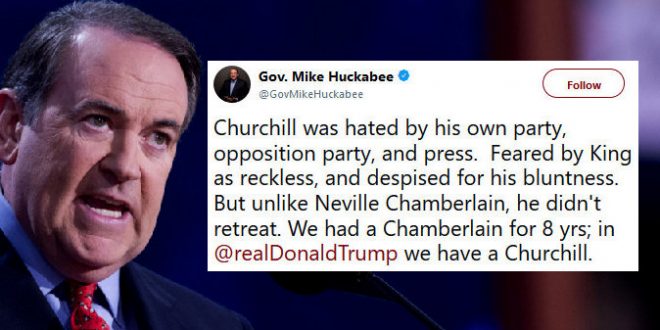 This afternoon liar Mike Huckabee, father of liar White House press secretary Sarah Liar Huckabee Sanders, lied that Trump is a modern day Winston Churchill. Huckabee went on to shill for the just-out Churchill biopic, The Darkest Hour. As you’ll see below, Twitter wasn’t having hit. They weren’t having it a lot.

Churchill was hated by his own party, opposition party, and press. Feared by King as reckless, and despised for his bluntness. But unlike Neville Chamberlain, he didn’t retreat. We had a Chamberlain for 8 yrs; in @realDonaldTrump we have a Churchill.

ALL OF BRITAIN IN UNISON: Trump is no Churchill.

Sure. Churchill served his country 55 years in parliament, 31 years as a minister and 9 as pm. He was present in 15 battles and received 14 medals of bravery. He was one of historys most gifted orators and won the Nobel Literature Prize for his writing. Totally same thing…

If Churchill had a 5th grade education, was a serial liar, preyed on women, and spoke like a child, then sure, just like Churchill

2) Chruchill told the truth; @realDonaldTrump is a pathological liar.

Trump is actually America’s Mussolini, only Trump is much more stupid and incompetent. pic.twitter.com/ufzZfFAFro

One of @realDonaldTrump‘s biggest lies was his “drain the swamp” slogan: he promptly filled his administration with swamp-swellers, lobbyists, cronies, con-men and incompetent assclowns like himself.

But unlike Trump, Mussolini actually did drain a swamp! pic.twitter.com/Z33NArqawp

Churchill: After the disaster of Gallipoli resigned from office in 1915 and went to fight in the trenches b/c he felt wrong having sent so many men to their deaths while he risked nothing.

Trump: 6 deferments from Vietnam because his feet hurt. https://t.co/kLgrVh7uRp

It’s a bad idea to learn your history at the movies. https://t.co/C88bcmFGhU

Previous Trump Breaks Century-Old Tradition, Hosts No State Dinners, Instead Makes 100+ Visits To Own Properties
Next Brian Brown: NOM Has Helped Erode LGBT Civil Rights In 2017 So Send Us Money Right Now As Our Reward