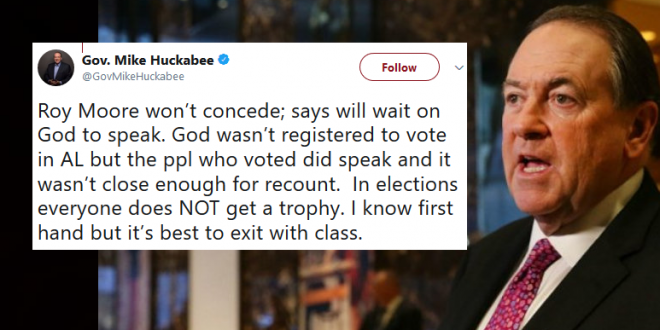 Alabama state law requires an automatic recount when election results are within 0.5 percent. With 100 percent of precincts reporting, Jones holds 49.9 percent of the vote, compared to Moore’s 48.4 percent, a 1.5 percent gap, according to The New York Times.

Alabama Secretary of State John Merrill (R) was asked by CNN’s Jake Tapper if he expected “anything other than Mr. Jones being the next senator from the state of Alabama.” “I would find that highly unlikely to occur, Jake,” Merrill said.

Roy Moore won’t concede; says will wait on God to speak. God wasn’t registered to vote in AL but the ppl who voted did speak and it wasn’t close enough for recount. In elections everyone does NOT get a trophy. I know first hand but it’s best to exit with class.

Actually, She spoke loud and clear 🙂