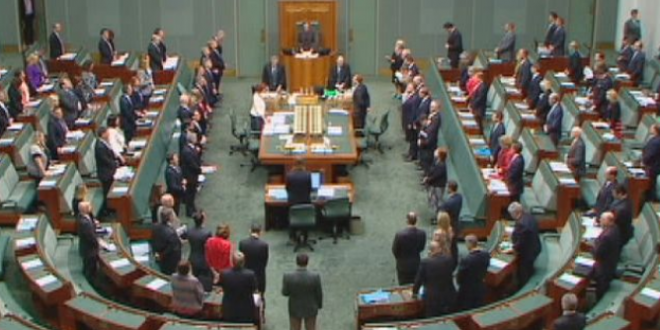 Same-sex marriage faces its final test in Parliament this morning when politicians vote on final changes to the historic bill proposed by Tony Abbott. Labor predicts the bill can pass parliament as early as 2pm today — the final scheduled sitting day of the year — if no last-minute changes to the bill are made. But if any changes are approved, both houses of parliament will be forced to remain in Canberra tomorrow until the bill is passed.

“If any of the amendments are carried, and I don’t think they will be, we have a problem,” Labor frontbencher Tony Burke told Sky News this morning. “I would be surprised if any of the amendments get up and certainly if they were to get up, we could potentially be here for quite a while.” Mr Burke predicted same-sex marriage could be made legal in Australia shortly before Question Time at 2pm, or about an hour after the session at 4pm.

Just after 10pm last night Bob Katter decided he would join his colleagues in the House of Representatives and share his thoughts on same-sex marriage. It was quite the eye-opener. Mr Katter began his rambling address by criticising the debate as “drivel” and noting that no one seems to get married in North Queensland anyway. He later started rambling about genetics, AIDS and the “vanishing race”.

“The people advocating this proposition tonight, the LGBTIs, have maybe 60 years on their side. I have 3.5 million years of genetic programming on my side, because we human beings, they tell us, have been around for 3.5 million years,” he said. “One thing that is absolutely certain is that we’ve all developed from heterosexual couples. That is one thing we know absolutely — up until the last 40 years, anyway.”

Then made extraordinary allegations about children getting AIDS. “You talk about equality. They wanted equality in the giving of blood. They said, ‘We as homosexuals have a right to give blood,’ so they did, and I think 72 children were injected with AIDS from the blood that was given. It was hushed up. It was amazing to me that it never got any publicity at all.”

“Finally we will have equality in Australia… later, LET’S PARTY!” @MagdaSzubanski out front of parliament today. #MarriageEquality #yes today is the day! ❤️💛💚💙💙 pic.twitter.com/QmFJQPnhMn

“If you want to throw a young lad between the ages of 9- 15 and make him go to school wearing a dress, you seriously mess with his head.” Bob Katter has said people are “genetically programmed” to be heterosexual. He also added that he was absolutely not “anti-homosexual.”#9Today pic.twitter.com/o4nSwkQrAC