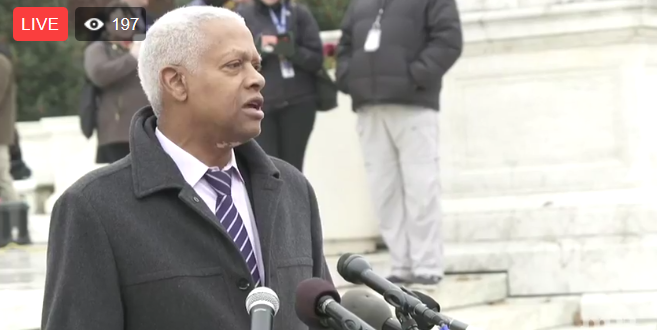 LIVE VIDEO: Activists Speak Outside Supreme Court As Anti-Gay Colorado Baker Case Is About To Be Argued

When is a wedding cake not just a cake, but a statement of profound religious beliefs? That’s the question being debated today at Supreme Court as it hears oral arguments about LGBT rights yet again.

This fight is much different than the one settled two years ago in Obergefell v. Hodges, which declared that states cannot refuse to perform or recognize marriages for two people of the same sex. Masterpiece Cakeshop v. Colorado Civil Rights Commission is not explicitly about marriage but rather about whether there can be exemptions to nondiscrimination laws.

While the wedding cake baker is asking for a narrow exemption, the cultural shift revealed is broad: Conservatives have changed how they engage in politics and law, transforming U.S. culture wars.

The question is whether a Colorado cake baker, Jack Phillips, has a First Amendment right to be excused from his state’s nondiscrimination laws, which say that public accommodations — like bakeries — may not refuse to serve people based on characteristics that include race, color, disability, sex or sexual orientation.