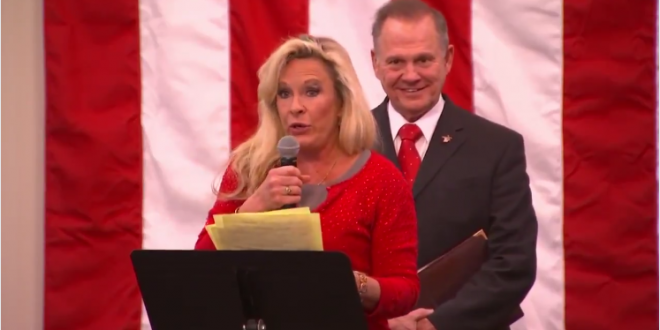 Kayla Moore Tells Rally Crowd: We Can’t Be Anti-Semitic Because One Of Our Attorneys Is A Jew [VIDEO]

The wife of embattled Alabama Senate candidate Roy Moore fought back against accusations that her husband doesn’t support blacks or Jews, saying at one point that one of their attorneys “is a Jew.”

Speaking at a campaign rally Monday night in Midland City, Alabama, Kayla Moore pointed out that her husband appointed the first black marshal to the state Supreme Court. She said they also have many friends who are black.

But she raised the most eyebrows in her defense against claims that her husband, who’s a Republican, is anti-Semitic. “Well, one of our attorneys is a Jew,” Kayla Moore said. “We have very close friends who are Jewish and rabbis.”

Roy Moore proudly stands for Judeo-Christian values, like, for instance, that all Jews are going to hell.

In which a US Senate Candidate says that all Jews go to hell. #NoMoore https://t.co/UI80E0EDgC