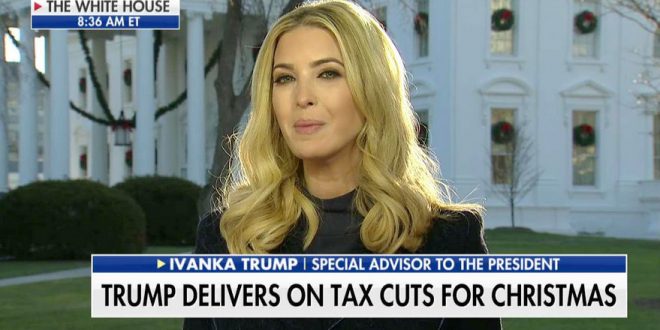 Ivanka Trump was blasted on Twitter on Thursday after she appeared on Fox & Friends to applaud the Republican tax bill as a win for the “middle class” and predicted that it would eventually erase the federal deficit.

After the hosts of Fox & Friends praised the president’s daughter for her role in passing the tax bill, she explained that she would be traveling around the country early next year to celebrate with the American people.

“I’m really looking forward to doing a lot of traveling in April when people realize the effect that this has,” she said. “The vast majority will be [doing their taxes] on a single postcard.”

Ivanka, who was one of the administrations key ambassadors for the tax bill, doesn’t know April is the deadline for people to pay their previous year’s taxes, and maybe even thinks the postcard thing isn’t just some bullshit Paul Ryan made up. https://t.co/4BUyVnXa36

Ivanka Trump Just Told The Dumbest Lie Yet About The GOP Smash And Grab Tax Cut For The Rich https://t.co/lNw6JHlgCk pic.twitter.com/fSiYrhaYWI

Obviously Ivanka has never filed her own taxes and hasn’t thought about this much, but in April people will be doing their 2017 taxes and the new law won’t have taken effect. https://t.co/FwosE0rxfL

Ivanka may be stupid and not know how taxes work but her hair is pretty nice and her Botox is on fleek. pic.twitter.com/83sblRRViY

Ivanka on Bob Corker, who just praised her on @foxandfriends minutes earlier: "He had real integrity around this process, I will say that for sure."

Denies his vote in favor of the tax bill had anything to do with the Corker Kickback. #CaseClosed pic.twitter.com/IlQD3fZrNn