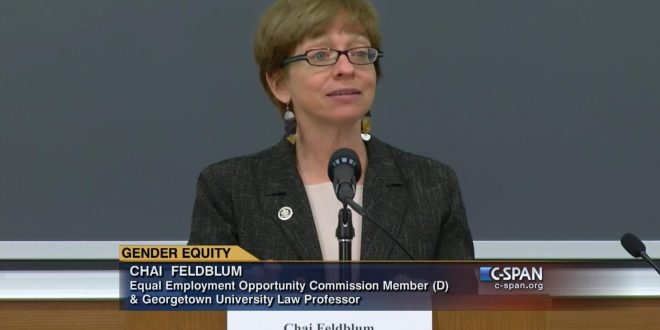 The president can’t personally oversee the hiring of 4,000 political appointees — which might explain the latest news. In a shock to conservatives, the Trump administration wants to give one of the most liberal LGBT activists of the Obama years another term.

Plenty of Republicans will remember the name Chai Feldblum, Obama’s head of the EEOC. She came to the administration with an impressive resume of radicalism — complete with jobs at the Human Rights Campaign, the ACLU, and a clerkship with U.S. Supreme Court Justice Harry Blackmun, who authored the Roe v. Wade decision.

She not only wrote the deceptively named “Employment Non-Discrimination Act” (ENDA) which is a threat to religious freedom in the workplace, she openly vowed to implement ENDA by regulations if Congress didn’t pass it.

But perhaps Feldblum is most remembered for pulling back the curtain on the same-sex marriage agenda. Asked what would happen if religious liberty clashed with the “rights” of people who identify as LGBT, she brazenly stated that she’d have “a hard time coming up with any case in which religious liberty should win.”

That’s chilling, FRC warned at the time, since as head of the EEOC, she would act as the head referee on disputes over workplace discrimination. If Americans were hoping for neutrality, they certainly didn’t get it under Chai’s leadership.

Based on the last six years, Feldblum hasn’t earned our trust — or another chance. When she was asked about the rights of Christians hiring employees of their choosing, she replied, “Gays win; Christians lose.” That’s in complete contrast with President Trump’s beliefs and stated objectives, which leads me to believe that he wasn’t briefed on Feldblum’s activism or involved in her nomination.

The last thing this president wants on his EEOC is an arch enemy of his agenda on religious liberty. Even if the commission is required to have a certain number of Democrats, the White House doesn’t have to take just anyone (or, in this case, the worst possible option).

The viciously anti-LGBT LifeSiteNews has also posted a screed against Feldblum.