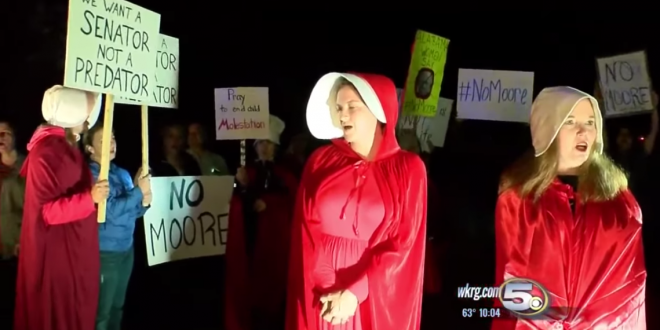 Silent, heads bowed and dressed in scarlet robes, a group of women stood Tuesday as a symbolic protest to Alabama Republican Senate candidate Roy Moore. The protestors were costumed as the handmaids characters inspired by the 1985 novel “The Handmaid’s Tale,” which was made into a TV series on Hulu this year. The women stood along U.S. 98 leading into the Oak Hollow Farm events venue just outside Fairhope. About seven others attempted entry into Moore’s rally with right-wing news giant Steve Bannon, but were asked to leave by security.

A protester chants “No Moore” during @MooreSenate speech holding this sign. Crowd turns quickly again chanting “USA! USA!” as protester is forced out of the barn. pic.twitter.com/dN9P0H7AeC

Protesters dressed in Handmaid’s Tale outside the rally for Roy Moore in Mobile, AL pic.twitter.com/gOUuwXEKxl