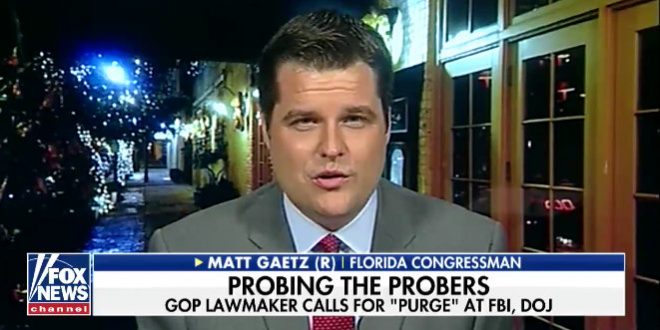 GOP Rep: If Robert Mueller Were Any More Biased, He’d Have Credentials From The Mainstream Media [VIDEO]

“Well here is what we know, the DNC and Hillary Clinton were paying people to go and pay Russians to tell lies about the president. And I guess that the best evidence of collusion against Republicans is that Republicans and Russia were all on the same Internet at the same time. It’s ludicrous. Why are we not investigating the real crimes of the real criminals?

“Why aren’t we investigating why the DNC’s activities with the Fusion GPS company that was employing Bruce Ohr’s wife, Nellie Ohr? That’s the real collusion, and it’s just outrageous to see this biased Mueller probe continue. I mean, if Bob Mueller were any more biased, we’d have to give him credentials for the mainstream media.” – GOP House Rep. Matt Gaetz, speaking on Fox News.

.@mattgaetz: “If Bob Mueller were any more biased, we’d have to give him credentials for the mainstream media.” pic.twitter.com/B8K25ED1Oc