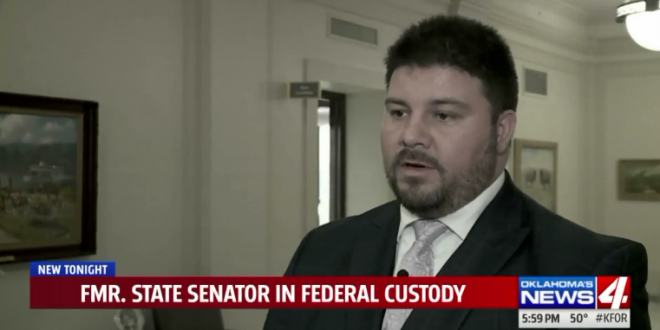 A former state senator could face up to life in prison after pleading guilty to child sex trafficking. Former Sen. Ralph Shortey, 35, entered a guilty plea Thursday after being caught with a 17-year-old boy at a motel. On March 9, the Moore Police Department was called shortly before 1 a.m to the Super 8 motel on N. Service Road for a runaway teen.

In court Thursday, Shortey admitted to first talking to the boy on a social media app before arranging to meet up. The boy needed money for spring break and was willing to exchange sexual favors. His attorney, Ed Blau, told reporters Shortey was ‘humiliated’ for his actions.

In court, Blau argued his client was not a flight risk and should be released pending sentencing. He added Shortey has a wife and four kids who are all homeschooled. Judge Timothy Deguisti denied the request, taking Shortey in federal custody immediately.

Three charges of possessing child pornography were dropped in exchange for the plea deal. Under federal rules, Shortey must serve 85% of his sentence, with the minimum sentence being ten years. A sentencing date has not yet been set.

Previous LIVE VIDEO: Michael Flynn Appears For Guilty Plea
Next GOP Claims They Have The Votes To Pass Tax Bill