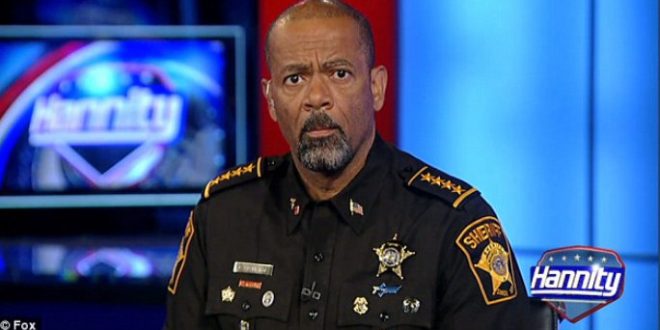 Long after federal prosecutors decided not to pursue criminal charges against then-Sheriff Dave A. Clarke Jr. over his treatment of a fellow airline passenger, an FBI agent’s request to search Clarke’s private gmail account was filed in federal court late Thursday.

In a March 7 affidavit in support of a search warrant request, Special Agent Jennifer Walkowski lays out the well-publicized January encounter between Clarke and Dan Black, and the ensuing hassle Black was subjected to by deputies at Clarke’s direction in the January incident.

Walkowski asked that the warrant application be sealed since at the time the FBI investigation involvement wasn’t known to possible targets. It sought all email activity records for the dclarke.cowboy account from Jan.15 and forward. Black’s civil rights lawsuit against Clarke remains pending in federal court.

In a tweet on Saturday, Clarke accused the “lib media” of reporting a story from earlier in the year as current news, and provided a PDF of a letter from U.S. attorney Gregory Haanstad announcing that no criminal charges would be filed in the case.

“They found no wrongdoing, that case is closed,” Clarke told Fox News on Friday. “Here we are in December and they are trying to re-dig this story, re-hash it, with lies interwoven in between it to make it seem like this is something new.”

The application actually shows that a Milwaukee county investigation found it to be “credible” that Sheriff Clarke was “in excess of his lawful authority to direct his deputies to stop and question Black without legal justification.”

Lib media did a drive-by hit job on me today with a FAKE NEWS STORY that I am under investigation by the FBI. It’s a LIE. Last MAY the US Atty’s office found NO EVIDENCE of wrongdoing for doing police work. Lying Lib media took a story from LAST MAY & reports this today as new. pic.twitter.com/ijyWp1IEW5