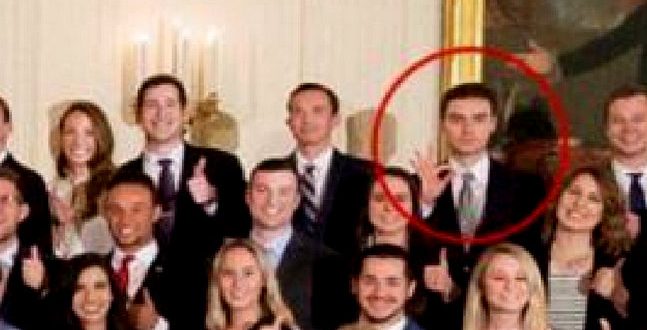 A former White House intern is coming under fire after flashing a known ‘white power’ sign during a photo-op with President Donald Trump.

Jack Breuer, who graduated from Emory University in Atlanta this year, is clearly bucking orders — personally given by the president — to give a thumbs-up in the picture that was taken in the White House in November.

While the other hundred or so interns smile and follow Trump’s command, Breuer, a dentist’s son who grew up in Chicago’s western suburbs, stands stony-faced giving the ‘OK’ sign that has been linked with far-right groups.

It is the same sign that white nationalist Richard Spencer gave on the steps of the Trump International Hotel on election night and that right-wing provocateur Milo Yiannopoulos posed with in front of the White House. EXCLUSIVE: A White House intern flashed the “white power” sign while posing with Trump and the rest of his intern class last month. https://t.co/klhohpKQ5d via @MailOnline

In some of our intern pictures, I emulated the OK sign the President sometimes makes. That was foolish. I should have listened more closely to the Commander-in-Chief and given the thumbs up. (1/2)

I’m proud of my Jewish heritage and strongly reject the hateful views associated with racist white power organizations. I would never make common cause with them. (2/2)

Previous Hacking Defenses Still Not In Place For Midterms
Next BACK TO WORK: Trump Golfs For 4th Straight Day