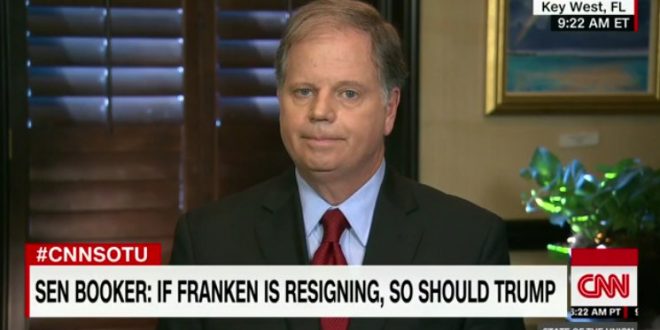 Senator-elect Doug Jones (D-AL) on Sunday said “we need to move on and not get distracted by” numerous women’s allegations of sexual misconduct against President Donald Trump.

Asked on CNN’s “State of the Union” whether Trump should resign because of the allegations, as some senators have called on him to do, Jones said, “I think we need to move on and not get distracted by those issues. Let’s get on with the real issues that are facing people of this country right now.”

“Where I am on that right now is that those allegations were made before the election, and so people had an opportunity to judge before that election,” Jones said. “I don’t think that the President ought to resign at this point. We’ll see how things go.”

Doug Jones: “I'm gonna commit to having a Senate office that reflects the diversity of Alabama. I can promise everyone that we're gonna represent the entire state.” https://t.co/U4b9ekJJmz

"I'm going to talk with people on both sides of the aisle to do what's in the best interests of the people of Alabama and across America." – Doug on how he will vote in the Senate

Very interesting! @jaketapper asks senator elect Doug Jones if he thinks @POTUS should resign over sexual alligation‘s! Doug Jones says, he was elected with those allegations & that he shouldn’t resign and we should move on! Jakes not happy..https://t.co/tmrkc8IDTu