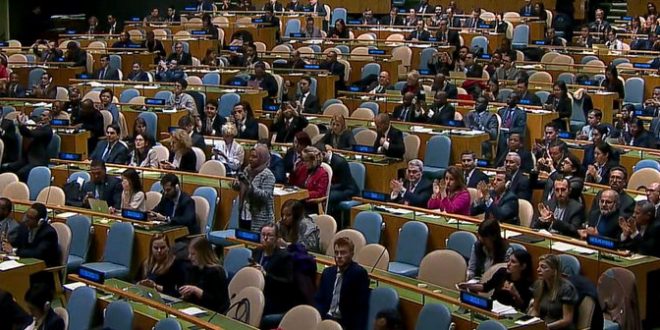 The overwhelming majority of the world’s nations delivered a stinging rebuke to the United States on Thursday, denouncing its decision to recognize Jerusalem as Israel’s capital and ignoring President Trump’s bombastic threats of revenge.

In what amounted to a collective act of defiance toward Washington, ambassadors of the 193-member General Assembly voted 128 to 9, with 35 abstentions, to approve a nonbinding resolution demanding that the United States rescind the Dec. 6 decision on Jerusalem, the contested holy city, which also included a plan to relocate the American Embassy there.

The vote came despite a redoubling of threats by Nikki Haley, the US ambassador to the UN, who warned that Washington would remember which countries “disrespected” America by voting against it.

Despite the warning, 128 members voted in favour of the resolution with only nine – including the United States and Israel voting against. There were 35 abstentions, including Canada.

While Thursday’s resolution was in support of existing UN resolutions on Jerusalem and the peace process, the clumsy intervention by Trump and Haley also made the vote a referendum on Trump’s often unilateral and abrasive foreign policy.

The threatening US posture, which had been denounced as both counter-productive and “bullying”, only seemed to have hardened the resolve of countries in opposing Trump’s 6 December move.