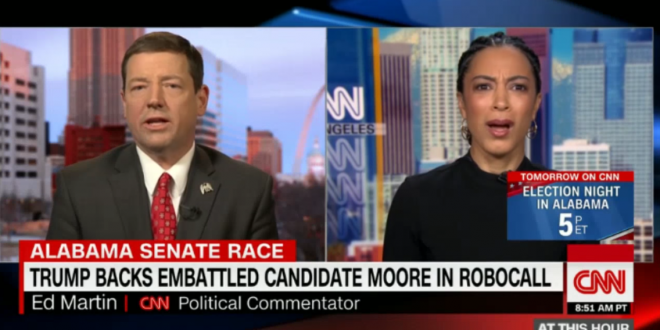 CNN’s Ed Martin: The Senate Won’t Be Voting On Slavery So It Doesn’t Matter If Roy Moore Wants It Back

“He’s getting elected to the Senate. When he gets to the Senate, he’s going to have to vote on things. And slavery’s not going to be voted on in the Senate, and it’s not — neither is homosexuality. And here’s the thing. Let’s be clear because it’s such a slur against him. What he said was families still loved each other when they existed. People in bondage, when the Jews were in bondage for years, they still loved each other.” – Right wing CNN commentator Ed Martin, dropping jaws on Twitter.

@CNN Why does Ed Martin still have a position there? After that exchange over #RoyMoore and slavery with Kate and Angela Rye shows why he is not fit to be a panelist.

Ed Martin this morning: “Slavery’s not going to be voted on in the Senate.”

Ed Martin this afternoon, probably: “Now that I think of it, child molestation probably won’t be voted on either, no worries.”

Amazing. Moore guy reduced to “look, they’re not going to be voting on slavery in the Senate so …” Also look at the woman’s expressions! pic.twitter.com/AjT2qHiAI2