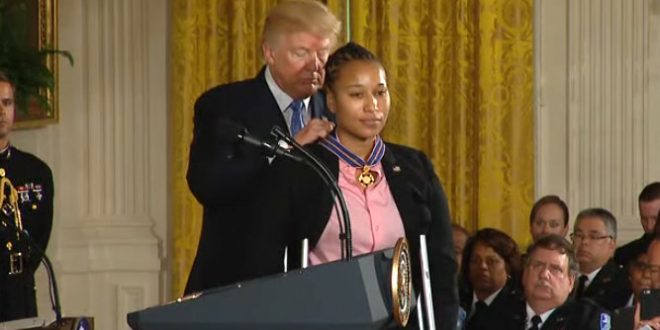 Breitbart this afternoon named its “top 6 LGBT icons of 2017.” Topping their list is Capitol Police Officer Crystal Griner, who is credited with helping stop the deadly attack on a Congressional baseball game.

What Breitbart doesn’t mention, of course, is that Trump honored Griner with the Presidential Medal Of Valor just one day after his demand to ban transgender citizens from the serving in the military. They also don’t mention that the medal ceremony came just one day after Trump’s Department of Justice filed a brief arguing that LGBT citizens are not protected by the Civil Rights Act of 1964.

At #4 on Breitbart’s list is actor Anthony Rapp, whose allegations effectively ended the career of Kevin Spacey. Rapp, presumably, is only on the list as part of Breitbart’s unending hatred for “Hollywood elites” – and not because they actually respect Rapp’s move in exposing Spacey.

Breitbart fills out the rest of their list with homocons Peter Thiel, Chadwick Moore, Dave Rubin, and Richard Grenell.  If you’re unfamiliar with any of these toolbags, just hit their labels at the bottom of this post.

Previous Politifact: Yep, Trump Lied About His Bill-Signing Record
Next REPORT: Trump Is Pleased With His Loony New York Times Interview Because It Dominated Today’s News