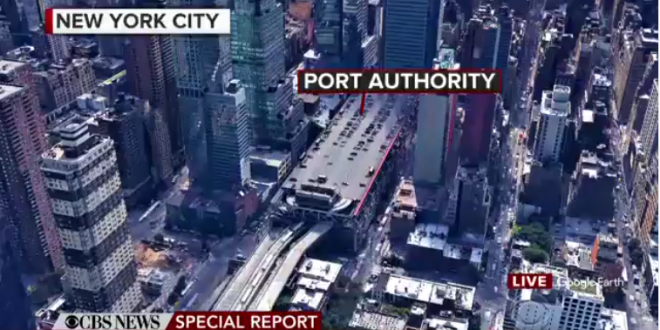 Several people were injured Monday morning when a device exploded at the Port Authority bus terminal on 42nd Street, according to law enforcement sources. One person is in custody after his device partially detonated inside a tunnel, sources told The Post. Police and firefighters have responded to the scene, where the bomb squad also has been deployed. The NYC Office of Emergency Management said commuters should expect delays.

The NYPD said it’s investigating the incident, and have cleared out the A, C and E subway lines that sit beneath the building. The alleged blast also shuttered the 1, 2 and 3 subway lines and locked down the area around the bus depot, which is between West 40th and West 42nd Sts. and Eighth and Ninth Aves. “I was exiting the Port Authority and the National Guard was running towards something shouting “Go, Go, Go,”” commuter Keith Woodfin tweeted Monday morning.

The NYPD is responding to reports of an explosion of unknown origin at 42nd Street and 8th Ave, #Manhattan. The A, C and E line are being evacuated at this time. Info is preliminary, more when available. pic.twitter.com/7vpNT97iLC

#Breaking: the FDNY states a man is in custody, a device was found, and the man possibly has wires on him. #PortAuthority

holy fuck. just was stuck in a running stampede at port authority bus terminal due to bomb scare. cops EVERYWHERE

This is the scene outside #PortAuthority right now; 8th Ave shut down in every direction, subways diverting. pic.twitter.com/plNelRhCmG

Previous NFL Launches Investigation After Texas QB Is Allowed To Return To Game After Scary Concussion [VIDEO]
Next REPORT: Mueller Likely To Question Bannon On Russia