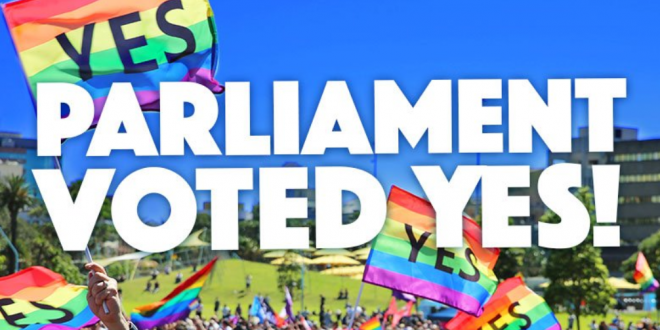 Australia’s parliament has legislated for marriage equality, passing a bill almost unanimously to allow two people, regardless of sex, to marry. On Thursday the House of Representatives passed a cross-party bill after an unprecedented national postal survey gave unstoppable momentum to legislate the historic social reform. Australia, which changed the law in 2004 to say that marriage is only between a man and a woman, now joins 24 countries which recognise same-sex marriage.

The lower house passed marriage equality with almost all members of the governing Liberal-National Coalition joining Labor, the Greens, and crossbench MPs in a free vote to pass the bill which cleared the Senate last week without amendment. The only no votes were Coalition MPs Russell Broadbent, Keith Pitt, David Littleproud and independent MP Bob Katter. Tony Smith declared the vote carried, since fewer than five MPs opposed it.

It’s a YES! Simply and fairly, #MarriageEquality is now law! Today our country can be truly proud. We did it together! 🎉 pic.twitter.com/lGZgUgSmyL

As the Australian Parliament votes down freedom protections, a cake artist who was targeted for his belief on marriage by interstate 🏳️‍🌈 activists (they drove half way across America to his cake shop), is in court. But, hey, no consequences. https://t.co/iHfhFNcbhX

Hello from America, you douchebag liar. That couple lives in DENVER just a few miles from the Masterpiece Cakeshop.https://t.co/Q6rM9QQ29l

That’s the director of the Australian *Christian* Lobby telling this ridiculous lie. https://t.co/LsSW5itga5