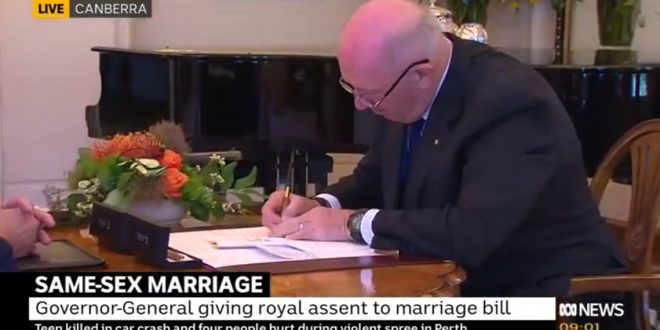 Australia’s prime minister rushed gay marriage into law on Friday by gaining a final signature on a bill hours after it was overwhelming endorsed by Parliament and as the nation started planning weddings that can take place in a month.

Cosgrove’s signature makes gay marriage legal in Australia from Saturday, when same-sex couples who wed overseas will be recognized as married under Australian law. Couples who intend to marry must give a calendar-month notice, making gay weddings legal on Jan. 9, Turnbull said.

At least 10 Government MPs chose to abstain from Thursday’s final conscience vote on same-sex marriage in the House of Representatives.

In the end there was no official record of the overwhelming support for the bill, because the Government benches were overflowing with Coalition, Labor and crossbench supporters. Only four MPs voted no — the Coalition’s Russell Broadbent, Keith Pitt and David Littleproud, and crossbencher Bob Katter.

According to the standing orders, if fewer than five people oppose a bill, it passes “on the voices” and the names of those who backed it are not officially recorded. However, a number of staunch opponents of the same-sex marriage bill were notably absent during the vote.

Among those abstaining was former Prime Minister Tony Abbott, who has twice traveled to the US to address the viciously anti-LGBT hate group Alliance Defending Freedom.

The Governor-General Sir Peter Cosgrove signed the same-sex marriage bill into law this morning. Now Turnbull has his sights set on the economy https://t.co/bpqI5TeBAi pic.twitter.com/KJzFOAtjij