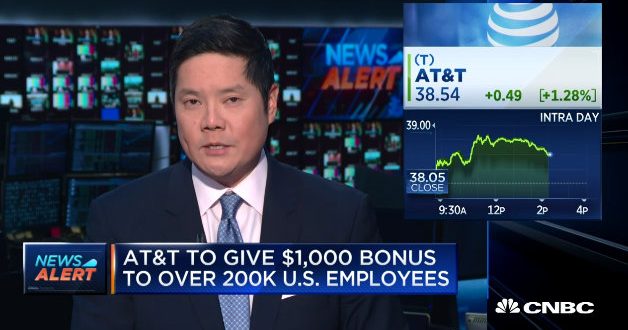 AT&T Announces $1000 Bonus For All Employees After GOP Tax Scam Bill Passes (But Hang On, Not So Fast)

AT&T was quick to respond to news of U.S. tax reform, announcing it would give some employees bonuses once the legislation is signed into law. The telecom giant said in a press release Wednesday that it would give more than 200,000 U.S. union members a special bonus of $1,000. The company also increased its capital expenditures budget by $1 billion in the U.S.

“Congress, working closely with the President, took a monumental step to bring taxes paid by U.S. businesses in line with the rest of the industrialized world,” CEO Randall Stephenson said in a statement. “This tax reform will drive economic growth and create good-paying jobs. In fact, we will increase our U.S. investment and pay a special bonus to our U.S. employees.”

Be skeptical of the companies that just happen to be announcing investments today. AT&T’s $1,000 employee bonus announcement today was actually first made last week and is mandated by a union agreementhttps://t.co/6YUqORzDaChttps://t.co/Bw7lgQqatd pic.twitter.com/ZRcXYwZWE0

7am: @SavannahGuthrie asks @SpeakerRyan if he's "living in a fantasy world" about positive potential of #TaxCutsandJobsAct