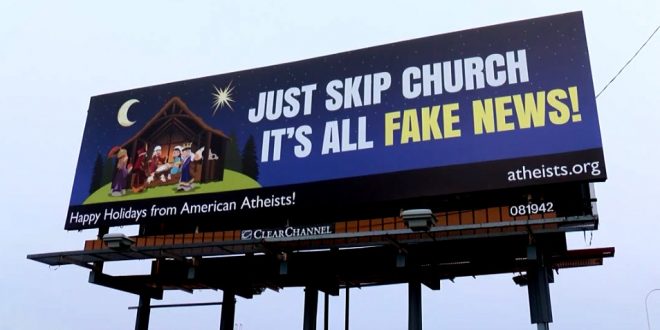 To the faithful, it’s a road sign on the highway to hell. The American Atheists group has continued an annual tradition by putting up billboards in Albuquerque, New Mexico, and Dallas-Fort Worth, Texas, that state “Just Skip Church… It’s All Fake News” alongside an image of the Christian nativity scene.

An attempt to put up two of the same signs in Oklahoma was stymied by the billboard company. Nick Fish, a spokesman for American Atheists, claimed the signs aren’t meant to offend, but to spark a dialogue by adding a topical tag line.

“It’s a way of starting a conversation not just with this organization but within a community,” Fish told NBC News on Wednesday. “The choice is often between being provocative or not being heard at all. If we can start that initial conversation, then we’re doing our jobs to get the ball rolling and get our foot in the door.”