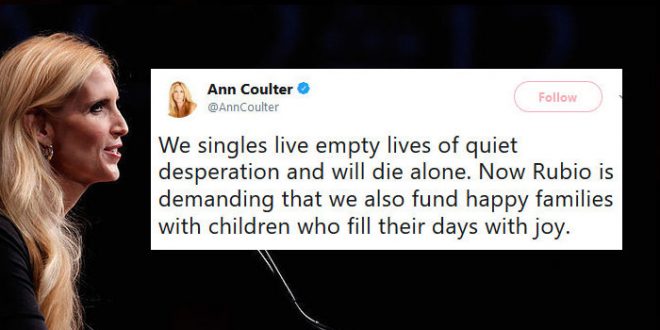 Ann Coulter has tweeted over 30,000 times. Most of those tweets consist of her promoting her right-wing agenda, some involve her yelling at Delta, and at least one features a beagle playing the piano.

Coulter, unhappy with Senator Marco Rubio’s desire to expand child tax credits in the Republicans’ tax plan, made her displeasure known on Friday — and, in doing so, sent out a bleak self-own.

We singles live empty lives of quiet desperation and will die alone. Now Rubio is demanding that we also fund happy families with children who fill their days with joy.

Ann was desperately hoping that the tax credit for cat litter, Marlboro Reds, indifferent box-wine Chardonnay and the gnawing loneliness consuming her soul would make it into the tax bill. pic.twitter.com/VsEK9MSS4E

Ann Coulter: “Children?! Are there still prisons? Are not the union with houses still in operation?”

come on, I thought you at least believed in “securing a future for our white children” https://t.co/QdGa5tKk39

Ann Coulter finally admitting that she’s joyless, unlovable, and will die alone has made my day. https://t.co/4cMH3FAmmq

Coming out against supporting happiness is the most Ann Coulter thing she could of said at Christmas.

Starbucks cashier: “hi, ma’am, how are you this mor…”

Ann, next time i would listen to the Ghosts of Past, Present and Christmas yet to come. @AnnCoulter https://t.co/6gBYKkdyjL