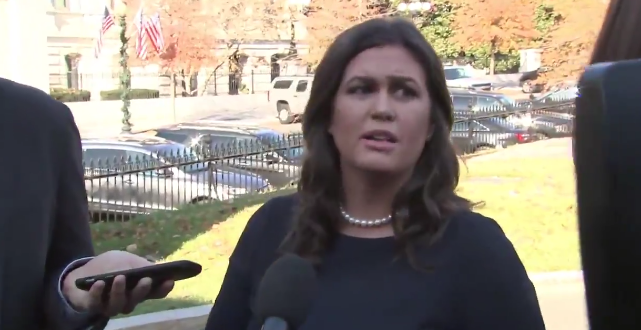 White House: So What If Trump Retweeted Fake Videos From Fascists, The Muslim Threat Is Real [VIDEO]

The White House has defended the unverified, Islamophobic videos that Donald Trump shared as driving home an important point – regardless of if they are real or not. “Whether it’s a real video, the threat is real,” Press Secretary Sarah Huckabee Sanders told reporters. “His goal is to promote strong border security and strong national security.”

At least one of the videos has been discredited by the site where it was originally published. The footage of a boy on crutches being attacked was posted to Dutch website Dumpert.nl in May of this year. The original video post contained no mention of the alleged attacker’s religion.

Another of the videos, which purports to show an “Islamist” mob beating a boy to death, was taken in Egypt in 2013. The victim was a young cleric who was critical of former Egyptian President Mohamed Morsi. He was murdered during clashes between Morsi’s supporters and opponents.

In re @realDonaldTrump retweets of @JaydaBF videos this morning @PressSec “Whether it’s a real video, the threat is real. His goal is to promote strong border security and strong national security.”

The man who complains about Fake News most re-tweeted a far-right, neo-Nazi affiliated hate group Britain First video claiming to depict a Muslim migrant beating up a kid. Except Trump’s retweet was fake. It wasn’t a Muslim, or a migrant. https://t.co/M2JCXOLbtR

Trump retweets video of crippled white kid in Europe being beaten by migrants, and white people being thrown off a roof and then beaten to death, He’s condemned for showing us what the fake news media WON’T. Thank God for Trump! That’s why we love him!

We are in the twilight zone.

Reporter: Does it matter that the video POTUS RT’d was fake?

Sarah Huckabee Sanders: The threat is real and that’s what POTUS is talking about. pic.twitter.com/MVO5rPy7EC

Previous Garrison Keillor Fired Over “Inappropriate Behavior”
Next New York Daily News: Trump Is A Profoundly Unstable Madman And We Are Witnessing Signs Of His Mania