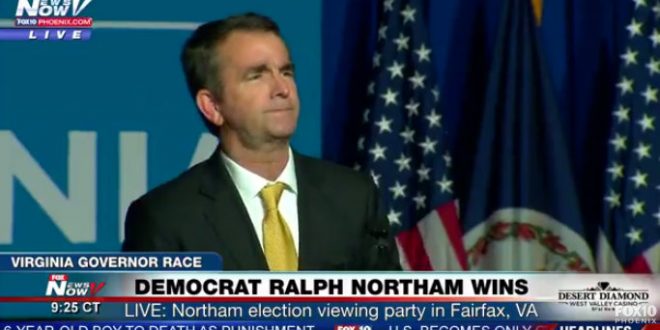 Democrat Ralph Northam handily defeated Republican Ed Gillespie in the Virginia governor race on Tuesday in a contest that was being closely watched for signs of the national electorate’s mood.

With 99 percent of the vote counted, Northam had 54 percent and Gillespie had 45 percent. Gillespie conceded in a speech last night to supporters several hours after the polls closed and wished the incoming governor all the best.

In his victory speech, Northam, a doctor, made a clear reference to President Donald Trump but never mentioned him by name.

“Virginia has told us to end the divisiveness, that we will not condone hatred and bigotry,” Northam said. “It’s going to take a doctor to heal our differences. And I’m here to tell you, the doctor is in!”

Northam was briefly interrupted by protesting immigration advocates who were removed from the stage by security. They appeared to be objecting to Northam’s recent statement that he would sign a law banning sanctuary cities in Virginia.