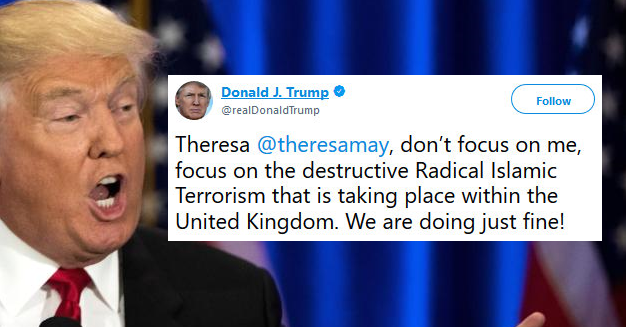 Trump Tweet-Rages At WRONG Theresa May

Trump just tweet-ranted at a random Twitter user in yet another example of his unwillingness to bother checking to see who he is screaming at. Hair Furor is angry at our strongest ally for denouncing his endorsement of a British fascist group whose follower last year assassinated Labour MP Jo Cox, screaming their name as he stabbed her to death. This is all actually happening.

You claim not to be racist but in the past two days you have insulted Native Americans and pushed Muslims under the bus.

Theresa May has criticised Trump’s retweeting of racist videos, the first time in living memory that a British Prime Minister has rebuked an American President.
Trump supporters will see this as further proof of the extent of the worldwide conspiracy to depict him as disgusting

Theresa May told Trump he was wrong to tweet nut-case videos, but let him off the hook and kept with the state visit.
He has doubled-down – of course – by insulting her. In any normal world, that should be enough to cancel that visit.