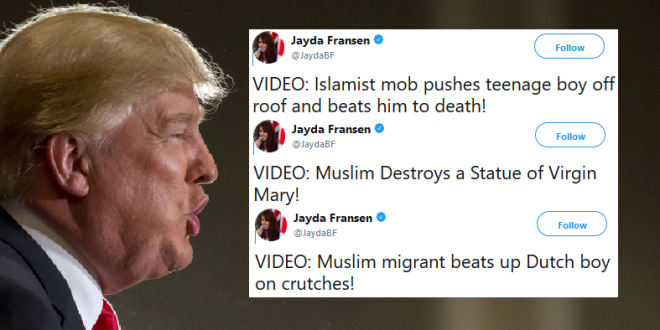 President Donald Trump retweeted a number of posts by the deputy leader of one of the U.K.’s most far-right, anti-Islamic activist groups.

Early Wednesday, the U.S. president retweeted three anti-Islamic videos posted by Jayda Fransen, the deputy leader of Britain First, a group whose members are banned from mosques in England and Wales.

The group was formed in 2011 by former members of the British National Party (BNP) another well-known far-right, nationalist party. Its members campaign against multiculturalism and what they see as the Islamization of the country.

The Guardian reports that earlier this month Fransen was convicted of “religiously aggravated harassment” for verbally abusing a woman wearing a hijab.

So it’s not lost in the sauce here: Trump is promoting hatred of Muslims. That’s what those retweets were about. That is the content and the purpose of the tweets. https://t.co/DCHLxaePX0

Disgraceful and tragic that a man whose wife’s murder was preceded by repeated shouts of “Britain First” should have to point this out. Solidarity with the Coxes; shame upon shame for Trump https://t.co/pjT80O2EnL

Trump has legitimised the far right in his own country, now he’s trying to do it in ours. Spreading hatred has consequences & the President should be ashamed of himself.

Trump sharing Britain First. Let that sink in. The President of the United States is promoting a fascist, racist, extremist hate group whose leaders have been arrested and convicted. He is no ally or friend of ours. @realDonaldTrump you are not welcome in my country and my city.

Oh my God, Trump just tweeted a Britain First far-right, ultranationalist account of a “Muslim boy beats up Dutch boy on crutches.” This is insane demonization of religious minorities by the President of the United States. It’s un-American. pic.twitter.com/U1C0ETeh6b

The “leader of the free world” is not only giving oxygen to fascists, but European fascists. Astonishing. pic.twitter.com/gPmydDMKoE