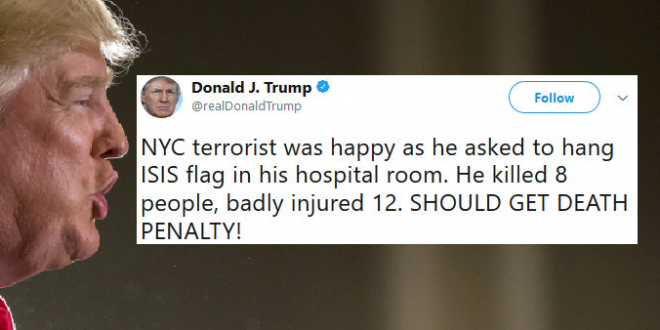 President Donald Trump said Wednesday that Sayfullo Saipov, the motorist accused of killing eight in New York City on Tuesday in a domestic terror attack, should face the death penalty for his actions.

The comments serve as Trump’s most direct call to action against the attacker since Tuesday’s lethal incident. It is extremely unusual for a sitting president to weigh in on an ongoing criminal trial process, let alone recommend capital punishment, and could potentially complicate efforts to prosecute Saipov.

In 1989, Trump famously paid $85,000 to call for a group of five black and Latino men to face the death penalty for the horrific rape of a woman in New York City, a crime the group, dubbed the “Central Park Five,” were later proved innocent of by DNA evidence. “Bring Back the Death Penalty!” read the ad purchased by the then-real estate mogul.

NYC terrorist was happy as he asked to hang ISIS flag in his hospital room. He killed 8 people, badly injured 12. SHOULD GET DEATH PENALTY!

…There is also something appropriate about keeping him in the home of the horrible crime he committed. Should move fast. DEATH PENALTY!

Previous Trump Shrugs Off Manafort Dumpster Fire: I’m Not Under Investigation And My Name Isn’t Mentioned
Next Supreme Court Justice Clarence Thomas: I Don’t Know What Americans Have In Common Anymore [VIDEO]