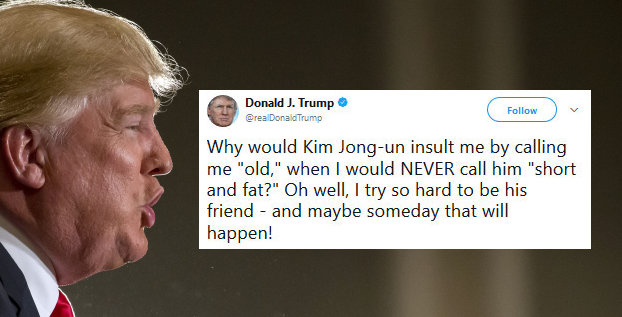 President Trump took time off from his morning in Vietnam to exchange insults with North Korean leader Kim Jong Un. At a news conference a few hours later, Trump said that while it would be “a good thing” if he and Kim became friends — “I think anything is a possibility; strange things happen in life” — he doesn’t expect it to happen.

Trump may be watching cable news. CNN, which is available in Vietnam, reported the North Korean Foreign Ministry as calling Trump a “destroyer” who “begged for nuclear war” during an Asia tour in which he asked China and other countries to pressure Kim’s government into giving up nuclear weapons.

Why would Kim Jong-un insult me by calling me “old,” when I would NEVER call him “short and fat?” Oh well, I try so hard to be his friend – and maybe someday that will happen!

Does the Fake News Media remember when Crooked Hillary Clinton, as Secretary of State, was begging Russia to be our friend with the misspelled reset button? Obama tried also, but he had zero chemistry with Putin.

When will all the haters and fools out there realize that having a good relationship with Russia is a good thing, not a bad thing. There always playing politics – bad for our country. I want to solve North Korea, Syria, Ukraine, terrorism, and Russia can greatly help!

Kim Jong-Un. “You are a lunatic dotard who could get us all killed.”
Donald Trump: “Yeah? Your* SHORT and FAT!”
Point to Mr. Kim.
(*Trump struggles with contractions.)

Some say the world will end in fire, some say in ice, but the smart money is on Trump making momma-so-fat jokes at Kim Jong-un.

Trump called him “short and fat.”

Both men can launch weapons that slaughter millions.
.