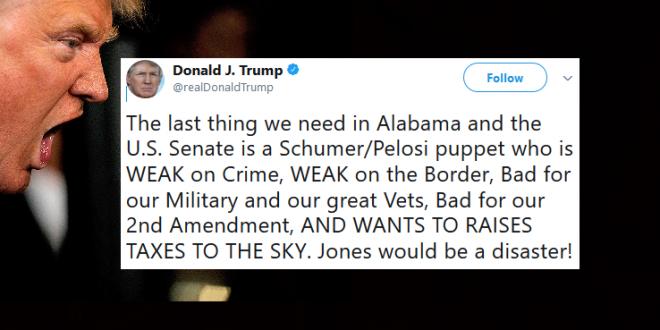 Trump Doubles Down: Doug Jones Would Be A Disaster

President Donald Trump on Sunday doubled down on his support for embattled Alabama Republican Senate candidate Roy Moore, taking to Twitter to disparage Moore’s opponent, Democrat Doug Jones. Against the wishes of Senate Majority Leader Mitch McConnell (R-KY) and other top Republicans, the president decided last week to take Moore’s side amid mounting allegations of sexual misconduct. The Republican National Committee and the National Republican Senatorial Committee have cut their financial ties with the Moore campaign, but the Alabama GOP is standing by Moore.

The last thing we need in Alabama and the U.S. Senate is a Schumer/Pelosi puppet who is WEAK on Crime, WEAK on the Border, Bad for our Military and our great Vets, Bad for our 2nd Amendment, AND WANTS TO RAISES TAXES TO THE SKY. Jones would be a disaster!

In which President Trump tries to rally support for accused child molester Roy Moore without using his name. https://t.co/5HRevsGwUH

Doubling down on his support for Roy Moore – and throwing a brushback at Mitch and Co >>https://t.co/UYctuL0F9Nhttps://t.co/nNQdtzKGpS

Trump ratchets up support for Roy Moore, despite growing allegations of sexual misconduct with teenagers and despite opposition from GOP leaders https://t.co/ApO18aeyY4

Trump wants a Roy Moore in the Senate like Roy Moore wants in a mall.