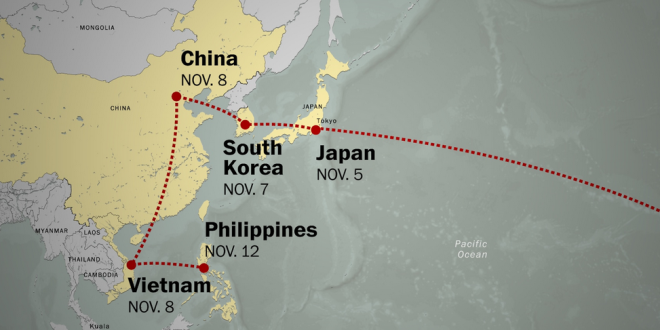 President Donald Trump embarked on the longest trip of his presidency Friday — a five-country, 10-day tour of Asia designed to strengthen diplomatic and economic partnerships while contending with North Korea’s nuclear threat.

The president heads overseas during a time of what some experts see as a decline of U.S. influence in the region and they suggest that it is unlikely that Trump will be returning home with any clear wins.

Mireya Solís, a co-director of the Brooking Institution’s Center for East Asia Policy Studies, said she had been wondering for some time if Trump would lose attention toward the end of a very long trip aboard.

“Now, I think the question has shifted: Is he going to be distracted from the get-go?” she asked. “Are the domestic political problems going to be first and foremost in his mind? Leaders in the region are wondering how much of the attention will be on the regional issues that are so pressing.”

President #Trump’s trip to Asia will be the longest trip to the region by a U.S. president since George H.W. Bush in 1991 pic.twitter.com/gLzNT2DzU3

Previous Trump Claims “Harder” Strikes On ISIS After NYC Attack
Next Elizabeth Warren Hits Back At Trump: You Think Your Tweets Are Cute But Your People Are Going To Jail