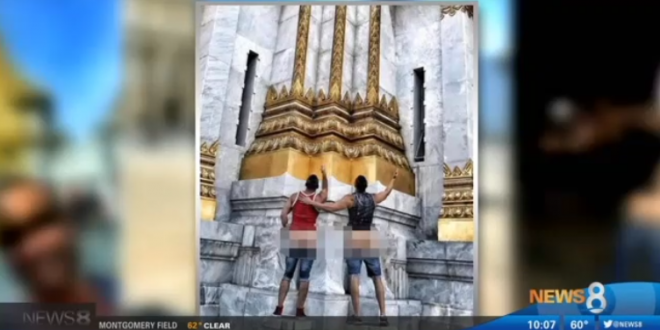 Friends of a San Diego couple fear the worst after the pair, known for their risqué travel photos, was caught up in a scandal overseas and disappeared.

The couple, Travis Ti and Joseph Dasilva, took photos at Buddhist temples in Thailand, and the concern has grown on social media after a post said they were at a police station.

The San Diego couple known as Traveling Butts on Instagram has more than 14,000 followers on the social media platform. Their photos showcase themselves posing with their naked rear ends in front of landmarks across the globe.

Their most recent posts in front of Buddhist temples sparked outrage on social media after people called them ignorant and disrespectful.

The Thai government has released a statement:

“A gay American couple who author the Instagram page ‘Traveling Butts’ has been arrested at Don Mueang International Airport for having taken photos showing their backsides with the respected Temple of the Dawn. A deputy spokesman for the immigration police said the charge would not be a normal public indecency charge. Instead, they would be charged with committing indecency in a place of worship, which carries a long jail term. This is a reminder that everyone should have respect for Thai religion and culture.”