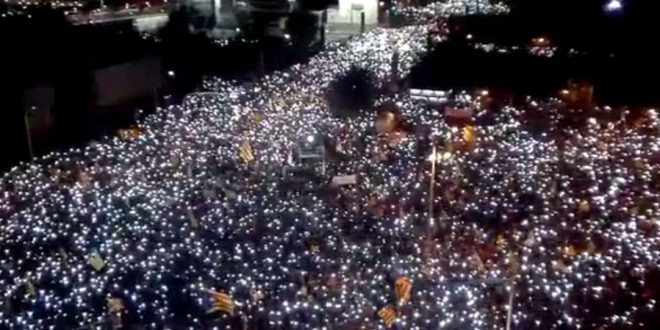 Hundreds of thousands of Catalan independence supporters clogged central Barcelona on Saturday to demand the release of separatist leaders held in prison for their roles in the region’s banned independence drive.

Wearing yellow ribbons on their lapels to signify support, they filled the length of the Avenue Marina that runs from the beach to Barcelona’s iconic Sagrada Familia church, while the jailed leaders’ families made speeches.

Catalonia’s two main grassroots independence groups called the march, under the slogan “Freedom for the political prisoners”, after their leaders were remanded in custody on charges of sedition last month. Barcelona’s police said that 750,000 people attended the rally.

The Catalan parliament declared independence last month following an unrecognised referendum on independence from Spain. Madrid responded by dissolving the parliament and calling a regional election on 21 December.

Since the crackdown by Madrid, Catalonia’s sacked President Carles Puigdemont has gone into self-imposed exile in Belgium, and his top allies have been prosecuted.

A lawyer whose firm represents two of his imprisoned former ministers told BBC News their situation had been made worse by Mr Puigdemont’s decision to flee.

#Barcelona #Catalonia #Freedom11N
Demonstrators marching in Barcelona 11/11/2017
Without violence, only a peaceful demonstration.
“You can imprison a man, but not an idea”. pic.twitter.com/VSfYZO05rl