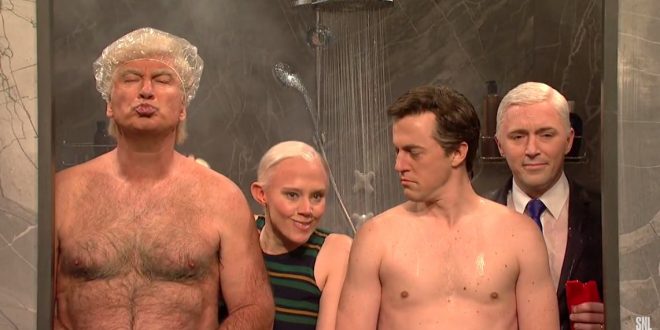 Alec Baldwin killed two birds with one SNL stone last night, reprising his Trump to jab both the president and Harvey Weinstein. “What an idiot,” said Baldwin in character about the disgraced ex-Miramax honcho. “He could have gotten away with all of it if only he’d gotten himself elected president.”

With Alex Moffat playing Paul Manafort, Beck Bennett as Mike Pence and Kate McKinnon doing her wonderfully bizarre troll-like Jeff Sessions, the whole gang ended up in a shower – so Trump could make sure Manafort wasn’t wearing a wire and a fully-suited Pence could wash Manafort’s back.