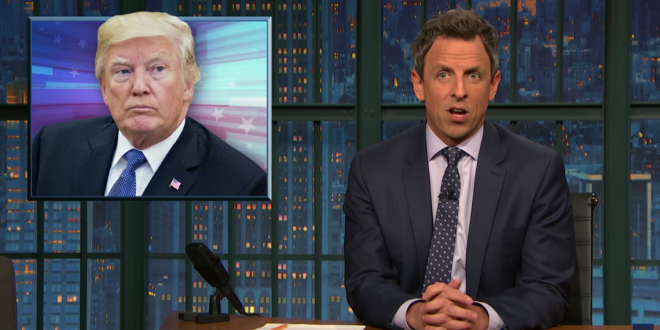 Seth Meyers Rips Trump Over Reports He Now Claims The Pussygate Tape Is Fake: Are You Insane? [VIDEO]

On Monday night, Seth Meyers ripped President Trump, who he believes will go down as the “neediest and the most insecure president.” The Late Night host then slammed the president for questioning the authenticity of the now-infamous Access Hollywood tape.

“Wait, you’re claiming that the Access Hollywood tape is fake?!?” Meyers said in shock. “Are you insane?!?… Oh, right.” Meyers pointed out that Trump “admitted it was real” and mocked Trump’s struggle to get off the bus as seen on the tape itself, proving the tape is real. “That is so dumb that no one would think to fake that!” he exclaimed.

Previous GOP Sen. Richard Shelby: I Didn’t Vote For Roy Moore, I Wrote-In Another Republican On My Absentee Ballot
Next Right Wing Conspiracy Theory Of The Day