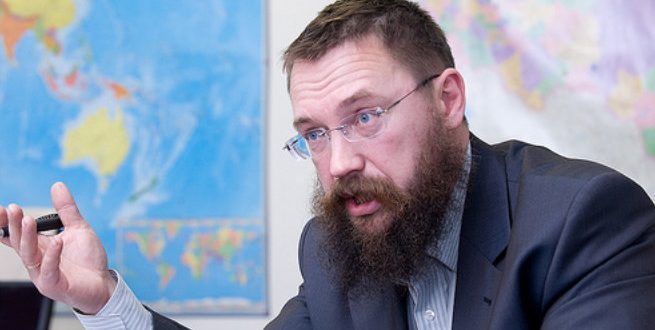 German Sterligov, an enigmatic multimillionaire and owner of the high-end chain Bread And Salt, said on his account on the Russian social network VKontakte this week that he is selling the chain’s six stores in Moscow due to pressure from authorities.

He posted images of letters he received late last month from local police and prosecutors about the homophobic signs, which he said had been changed from “No Faggots Allowed” to “No Sodomites Allowed” in a concession to authorities. “We would rather forgo profits in Moscow,” Sterligov wrote in his announcement that he plans to sell his Moscow stores.

Sterligov, who portrays himself as a pious Russian Orthodox Christian and a defender of traditional values, has made homophobia a central ideological tenet of the chain, which sells natural food and other products made by “Russian peasants.”

Sterligov said in his announcement that sales at his Moscow stores are “brisk.” He added that his decision to sell the stores was not a defeat, saying a “victory for the sodomites” would be to “force us to offer service” to gay men. “Those dirty perverts can keep dreaming, but we won’t do it,” Sterligov wrote. “Because we’re Christians.”

Russian activists are claiming a small victory over Sterligov, although it may be that pressure from Moscow authorities came because the signs violate the ban on any mention of LGBT people. Sterligov has publicly praised Trump, saying “May God grant him good health.”