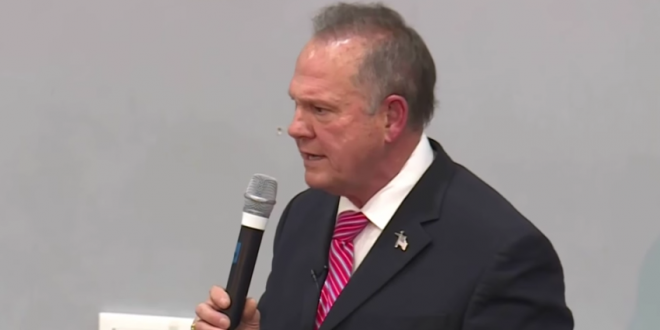 Roy Moore: I’m Being Harassed By The Media! [VIDEO]

Alabama Republican Senate candidate Roy Moore says he’s being hounded by the news media over sexual allegations against him, while briefly addressing the controversy Tuesday night.

“Why do you think they’re giving me this trouble? Why do you think I’m being harassed by media and by people pushing allegations in the last 28 days of the election? … After 40-something years of fighting this battle, I’m now facing allegations and that’s all the press wants to talk about,” Moore said while speaking at a church conference in Jackson, Alabama.

Moore, an evangelical Christian who was twice ousted as Alabama’s chief justice, suggested he’s being attacked for his hardline views on faith in public life as part of an ongoing “spiritual battle.” “But I want to talk about the issues,” he added. “I want to talk about where this country’s going, and if we don’t come back to God, we’re not going anywhere.”