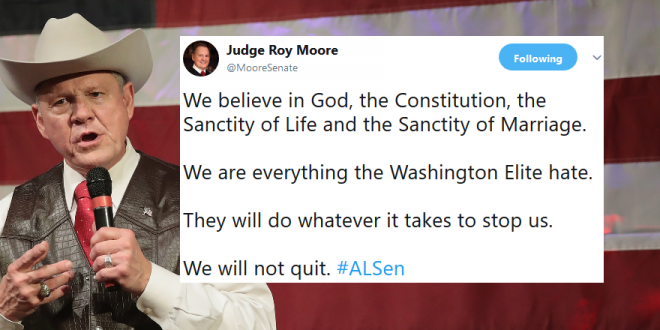 Roy Moore: I Am Everything Washington Hates

Judge Roy Moore made clear Wednesday that he will not be quitting his campaign for the Alabama Senate special election, even as calls for his exit from the race intensify.

The comment from Moore’s campaign comes as influential conservatives have rallied against him over the past 24 hours. Fox News’ Sean Hannity said on his show Tuesday night that Moore had 24 hours to explain himself against the allegations brought forth since last Thursday or to drop out of the race.

Matt Drudge, the founder and editor of the Drudge Report, referred to Moore as “Judge Whore” on his site earlier Wednesday when linking to a story claiming that Steve Bannon, the former White House chief strategist, may pull back his support for Moore.

We are everything the Washington Elite hate.

They will do whatever it takes to stop us.

We will not quit. #ALSen

The Republicans and Democrats who did everything they could to stop Donald Trump and elect Hillary Clinton are the very same people who are now trying to take us down with lies and smears. #ALSEN

We believe in hanging out by Spencer’s Gifts and saying, “that top looks cute on you” to 14-year-olds.

Previous LIVE VIDEO: Trump Speaks (About Roy Moore?)
Next Lindsey Graham’s General Rule: If A Mall Puts You On The “No Fly List” – You Shouldn’t Be In The Senate