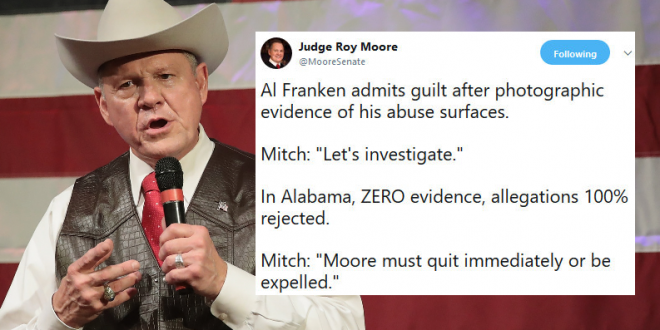 McConnell called for a Senate Ethics Committee investigation into Franken after TV host and sports broadcaster Leeann Tweeden on Thursday accused Franken of kissing her and groping her without her consent in 2006.

In Moore’s case, in which the GOP Senate candidate has been accused of sexual misconduct toward teenage girls, McConnell and numerous other lawmakers have called on the Alabama candidate to drop out of the race.

Mitch: “Moore must quit immediately or be expelled.”

I don’t trust someone to be a Senator who has no clue what the words zero or evidence mean.

So, what you’re saying is if you win the Senate should investigate. We’ll have your accusers up to testify against you under oath and everyone will have a grand old time I’m sure.