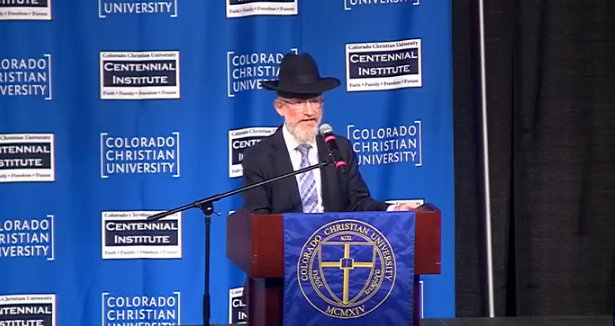 A conservative rabbi speaking at Wednesday’s Religious Freedom rally on behalf of baker Jack Phillips called same-sex couples “an abomination” and justified discrimination against them by comparing them to space aliens who “aren’t human beings.”

The rabbi is with the Coalition For Jewish Values. Here’s a bit of the transcript from his speech:

Let’s imagine E.T. lands tomorrow and someone falls in love with E.T. and decides to get married to E.T. Trust me – within two years the Supreme Court would decide that under the US Constitution Sally or Bill  could get married to E.T.

But because aliens are not human beings, and despite what you’ve seen on Star Trek, it would be impossible for aliens and humans to have children together- that would be the Biblical definition of marriage- and Jack Phillips would not be able to bake them a cake.

The rally was organized by Alliance Defending Freedom, which will represent Phillips before the Supreme Court next month.