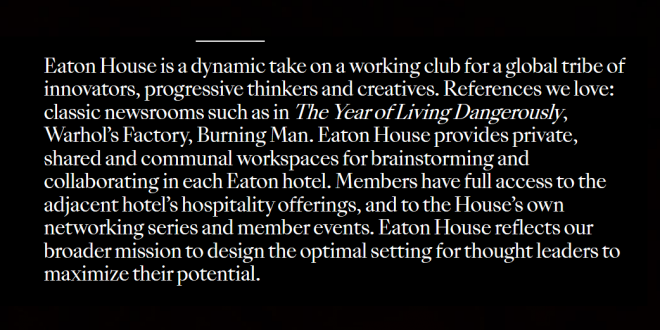 The first thing you’ll see when you walk into Eaton Workshop, a hotel opening in late spring 2018 in Washington, is a custom-commissioned video art installation by AJ Schnack, shown on a series of vintage-style television screens. All day long, it’ll broadcast a montage of footage from the presidential elections of 2012 and 2016 that’s built around one pointed question: How did our country get where it is today? It’s not a subtle statement, and it’s not meant to be.

In Trump’s Washington, Eaton is planting a clear flag as a haven for Democrats. It’s the world’s first politically motivated hotel, the flagship for a global brand that’s built around social activism and community engagement. And it comes with a pedigree: As the daughter of Ka Shui Lo, the creator and executive chairman of Hong Kong-based Langham Hospitality Group Ltd., founder Katherine Lo knows a thing or two about luxury hotels and world-class service.

Among the Washington location’s programming signatures will be a sort of TED talk series driven by the liberal agenda, consisting of fireside chats and rooftop lectures that Lo hopes will be free, open to the public, and streamable as Eaton-branded podcasts. Then comes the art program, which—aside from the political statement piece at check-in—will include commissions from at least a half-dozen up-and-coming local artists and a street-facing exhibition window curated in partnership with local museums and institutions.