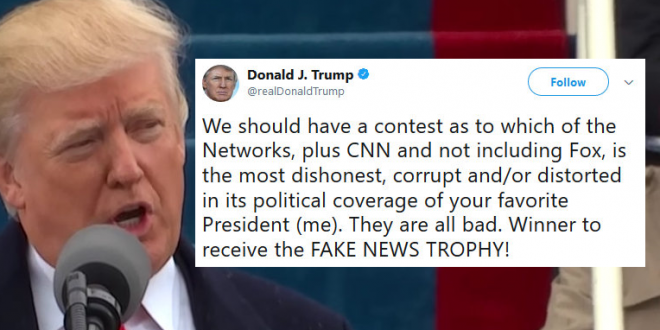 A plurality of Americans in a new poll think that Fox News deserves the first “Fake News Trophy.” A new poll from the conservative-leaning Rasmussen finds 40 percent of respondents think Fox News should get the Fake News Trophy, which was first suggested by President Trump earlier this week in a tweet.

The second place winner, according to the poll, was CNN, which received 25 percent support. MSNBC followed CNN with 9 percent, and ABC, CBS and NCB all received less than 5 percent support for the Fake News Trophy.

Fifty-three percent of Democrats and 42 percent of voters not affiliated with either major party say Fox News deserves the Fake News Trophy. The poll comes after Trump earlier this week suggested the media should compete for a Fake News trophy. But Trump said the competition shouldn’t include Fox, a network he is known to frequently watch.