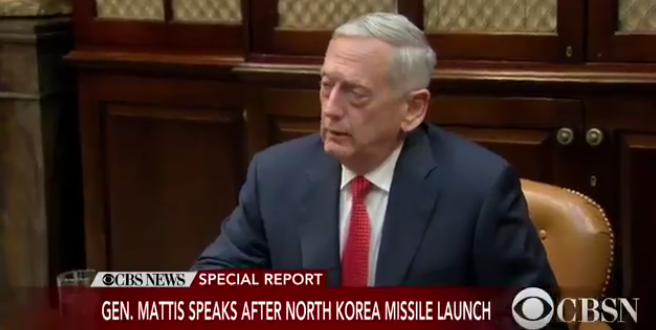 North Korea fired what the US military believes to be an intercontinental ballistic missile on Tuesday as the Pentagon confirmed that it detected and tracked a single North Korean projectile at 1:17 p.m. Eastern Standard Time.

“The missile was launched from Sain Ni, North Korea, and traveled about 1,000 kilometers before splashing down in the Sea of Japan, within Japan’s Economic Exclusion Zone,” according to Pentagon spokesperson Col. Rob Manning. “We are working with our interagency partners on a more detailed assessment of the launch.”

“The North American Aerospace Defense Command (NORAD) determined the missile launch from North Korea did not pose a threat to North America, our territories or our allies,” Manning added.

North Korea fired a missile. And this guy is President. How do we let the North Koreans know that *we* don’t support this guy either? Don’t blow us up.

NEW: Gen. Mattis says that today’s missile launched by North Korea could essentially reach any place in the world.

SecDef Mattis tells reporters that North Korean ICBM was fired 2.5 hours ago & it went higher than any other past test; points out that ROK fired missiles into water in response